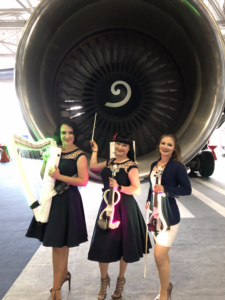 As the world’s only string rock band of its kind, Violectric® illuminates the stage and the audience’s senses through the use of cutting-edge technology and interactive experiences. They are the first and only LED instrument ensemble using their exclusive Violuminescence™ LED instruments with LaserBows™. Led by famed Producer, Composer and GRAMMY® Recording Artist Michelle Jones, the Violectric experience guides listeners through an interactive auditory and visual journey with their original arrangements of familiar music from Metallica to Led Zeppelin to SIA and other modern artists. Every musician is playing their part LIVE and memorized as they interacts with audience.

They have appeared, recorded and toured around the world with most every major name act in the business from opera to heavy metal. Violectric is an iHeart Radio Artist, and their music can be heard daily on SiriusXM Radio. Based in both Las Vegas, Nevada, and Orlando, Florida, they have performed to numerous sold-out houses in both cities and across North America. Violectric has also been selected as the first Artists in Residence for the new Dr. Phillips Center for the Performing Arts in Orlando, Florida, including live concerts and educational workshops with the Dr. Phillips Center AdventHealth School of Art and Wellness.

Violectric has been featured on various television and radio programs since 2010, including multiple feature segments on PBS, BBC, NPR, FOX, ABC and many others.  Founder and Bandleader, Michelle Jones composed the original score for the 2015-2019 Busch Gardens-Sea World Howl-O-Scream events including promo videos, commercials and in-park music. The soundtrack, recorded by the musicians from Violectric, can be heard on the Howl-O-Scream website or in the park during the event and continues to be played as in-park music.